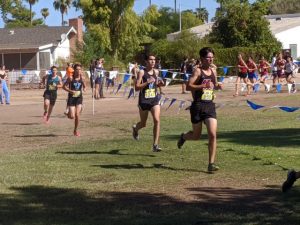 The Falcons competed in the Doug Conley Invitational yesterday. The course was measured to a distance of 3 miles, unlike the typical 5k distance. There were three different races for both men and women:  the Elite, Invitational, and the Non-Varsity races. Our lady Falcons put up a good showing in the Invitational. A team of Maya Jenkins, Alessia DiPhilippo, Natal Semapangi, and Olivia Radack took on the field of 118 runners. The field was composed of many schools from upper divisions offering the Falcons the chance to face off against some great competition. As a result Jenkins ran a 24:30, Radack- a 27:03, DiPhilippo- a 27:29, and Sempangi- a 32:13.

an error with the registration process and no warm-up because of it, the boys ran surprisingly well. Hirsch ran a 20:13, Espinoza ran a 20:35, and Logan ran a 21:55. A few hours later the Boys Elite race was ready to start. For the Elite, the team comprised of Jon Barney, Mat Barney, Nick Logan, Timmy Soukup, Maximo Valencia, and Peter Schillinger. The competition was tough in this race. Most of the teams were 2018 D1 State Qualifying teams. Nevertheless, the Falcons showed their tenacity by placing 5th out of the 14 team field. Jon Barney led the way with a 17th place finish in a 16:32, Logan finished in 31st with a 16:58, Matt Barney finished in 36th with a 17:07, Valenci finished in 43rd with a 17:24, Soukup rounded out the scoring with a 54th place finish in a 17:46. Peter Schillinger finished in 73rd with an 18:06.

The Falcons will race again at the inaugural Phoenix Classic at Crossroads Park on Friday Octorber 4th. The races will be at night.

No Events This Week

Events are added by athletic staff.
View All Events